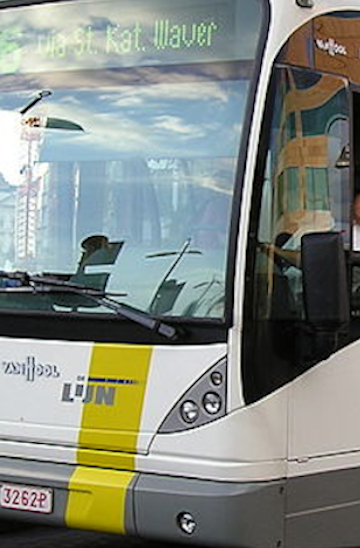 After aiming for a first autonomous shuttle bus at Brussels National Airport in 2020, Flemish bus company De Lijn will also introduce a new form of flexible transport in Antwerpen, Leuven, Mechelen and Genk.

De Lijn is currently in discussion with five possible manufacturers to supply the four mentioned cities with self-driving buses. The possible suppliers include: Navya-VSE (France, Belgium), Local Motors (USA), Scania Belgium NV (Belgium) and Easymile-Systra (France-Belgium) and 2GetThere (the Netherlands). 2GetThere is currently building the autonomous shuttle for the De Lijn pilot project in Brussel’s Airport, starting this time next year. After evaluating the manufacturers’ proposals, De Lijn is expected to announce its choice by fall 2020.

The pilot phase aims to start in 2021. The selected manufacturer must construct a vehicle, capable to drive safely in mixed-traffic situations. The results of this pilot phase will be assessed to expand the project towards passenger transport.

The Brussels bus shuttle is planned to be launched between the airport terminal and the cargo business zone and parking areas in 2021. The shuttle runs independently at a speed of on average 20 km/h on a fixed route by magnets and sensors. The magnets are located in the ground and serve as beacons for the autonomous bus to indicate the way and to share the road with other traffic. The technology will be further developed based on the results of this pilot project. In the course of 2020, longer periods with additional tests will take place in mixed traffic on the Brucargo business zone. If these tests are positive, the passenger system can be further expanded and the dispatch center, interfaces and charging stations will also be added. In the middle of 2021 passenger transport can be started.

An autonomous shuttle or self-driving bus is a slow-moving vehicle that follows a fixed route with reduced traffic complexity. It controls, brakes and accelerates independently, so without a human driver. A central traffic room follows the vehicle permanently and takes over control if necessary. In addition, an independent body monitors the safety of the system.

Read more about the De Lijn’s plans here (in Dutch).