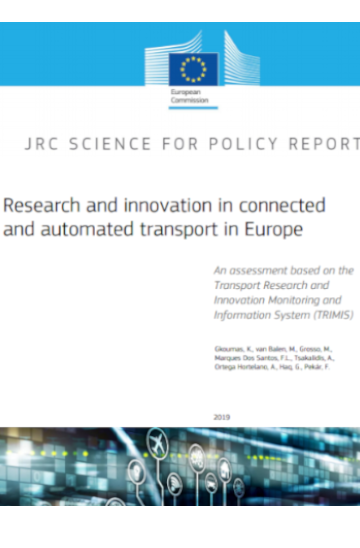 At the beginning of January 2020, the Joint Research Centre (JRC) – the European Commission’s science and knowledge service have published a policy report on “Research and innovation in connected and automated transport (CAT) in Europe”. The report aims to provide evidence-based scientific support to the European policy making process.

The report presents a comprehensive analysis of research and innovation (R&I) in connected and automated transport in Europe in recent years, focusing on European Union-funded projects. It identifies progress in several thematic fields and technologies while highlighting the policy context and market activities in Europe and beyond. The assessment follows the methodology developed by the European Commission’s Transport Research and Information Monitoring and Information System (TRIMIS). The report critically addresses research by thematic areas and technologies, highlighting recent developments and future needs.

Among others, the main findings and conclusions include: