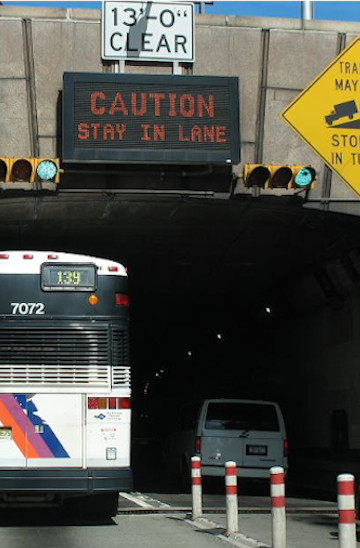 An exclusive bus lane in the Lincoln Tunnel between New York and New Jersey is the most busy highway lane in the US. During the peak morning rush each weekday between 6 a.m. and 10 a.m., the route carries currently about 1,850 buses.

The Port Authority of New York and New Jersey agency will test autonomous buses in the 2,5 miles long Lincoln Tunnel’s exclusive bus lane to increase the capacity of one of the country’s busiest bus lanes by employing self-driving vehicles. The Port Authority roughly calculates that the technology could allow for 200 more buses to run each morning, giving 10,000 more people a ride to the Midtown terminal. Port Authority officials believe that the new technology could increase capacity by 30 percent by letting buses travel closer together.

The Port Authority of New York and New Jersey said it will spend about $5 million to test the autonomous technology through a pilot program that will run through May 2021. During the test, no passengers will be on the buses. Bus companies traveling through the tunnel must agree to install the technology on their vehicles. Two vendors were chosen by the Port Authority for the test run: the Southwest Research Institute and Robotic Research LLC. A vote on the pilot program will take place in December 2019.